There is a lot of good to great TV going on these days, and the MRS and I watch quite a bit.  Actually, we’re right on the cusp of too much, but still in the “Not Fanatic” category.  At any rate, we’d like to share some of our observations on several of the shows that we view on the regs.  Hopefully, you all will share some of your thoughts with us too.  Let’s begin, I’ll start.  True Blood.  I admit I came to this show late.  Maria introduced me, as her and Gina and Candi et al were bona fide fanatics, watching at the infamous Park Street.  It took me a while but I grew to love it too.  Sookie and Bill, Eric and Sam.  Lafayette (Lala) and Andy and on and on.  All the great humans and vampires of Bon Temps.  That being said, I’m glad it’s all coming to an end, it’s time.  One more show to go.  Will Bill live or accept the true death?  Will then Sookie end up with Eric?  Will they leave enough people alive to make a movie version someday?  All to be answered on Sunday.  I bid a fond farewell to the show with BY FAR the best opening song of any series in history!  “I wanna do REAL bad things with you!”

First off, they don’t call us fanatics, we’re “Truebies”.  Yes, we like all great fans of anything 21st century have our own specific bastardized name.  Sometimes they like to call us fangbangers.  In truth, I’ve been watching loyally since inception in 2008.  My HLP (hetero life partner) Gina read the Charlaine Harris series and when she found out that HBO was debuting a show based on the books, she instructed that I begin reading immediately.  And when Gina tells me to read something, I always do.  She is not only the fastest reader I’ve ever met, but prolific as well.  The books are fantastic.  And as soon as I started reading, I couldn’t put them down.  Each week we gathered like a nest of the bloodthirsty vamps, all vying for another little drop of this addictive, fast-paced and sexually charged show.  It rarely disappointed me until the most recent seasons – but I’m a Truebie.  I love it.  Even still…it’s a guilty pleasure.  I am sad that it’s going and I will dreadfully miss it.  But it’s time.  I’ve made peace with that.  And there’s something cathartic about it ending in 2014, the same year my days of single life reached their end as well. 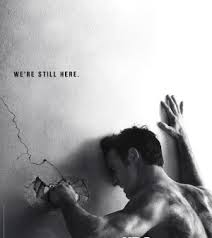 Next up: The Leftovers.  From the same people who mind fucked us for 7 years with Lost, The Leftovers is well on it’s way to delivering me into the abyss of endless, answerless questions.  You just know these guys were like, “hey I’ve got an idea, there’s a plane that crashes on this mysterious island and there’s smoke monsters and wild animals and a doomsday button and etc etc etc”, and Lost was born.  And then: “how about 2% of the earth’s population disappears, like poof!”  There’s a show, The Leftovers.  I’m positive they start and don’t have a clue where they’re heading.  I love it, you probably do too.  But be warned, you’re in for years and years of torture.  Don’t say I didn’t tell you.

I wasn’t thrilled about embarking on what was sure to be a 5 to 8 year commitment, depending on ratings.  Mind fucks are only my jam when they pepper some answers gradually.  But The Leftovers hasn’t given me an iota of a fucking clue as to what’s happening.  Most weeks I just sit on the couch praying that the smoker’s cult dressed all in white will be bulldozed miraculously.  But I keep coming back.  Mostly because Ross enjoys watching and I just get sucked in from the periphery.  It’s equally as hard to watch as it is not to.  Bastards. 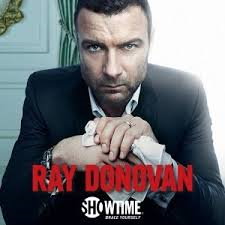 Next…Ray Donovan.  Boy, oh boy.  This Donovan family is “fucked up to a fare thee well” – in the notorious words of John Gallo, Ross’ dad.  Ray’s a sociopath, his wife is a hot mess, his kids are a wreck and his father, Mickey, is a piece of work.  Mickey is the highlight of the entire show.  Jon Voight plays this role like an old pro.  Stealing every scene with his ridiculous antics and the kind of natural swagger you can only acquire from being an actor as long as he has.  If nothing else, this show is entertaining.  And there’s always something for Ray to fix in the Hollywood hills.

I used to think Ray Donovan was The Sopranos-west, but now I look at it as more of a comedy.  Maria is so right, these people are a train wreck, every single one of them.  And the addition of Hank Azaria this season as the single-mindedly ambitious head of the LA division of the FBI, has amped up the crazy by ten times.  It’s so off the rails now, almost every scene makes me laugh.  One last bit of agreement with my better half, Jon Voight is the main reason to watch the show, next best thing to Christopher Walken.

We’ve saved our two current favorites for last.  First: The Strain.  Man, if you haven’t seen FX’s new take on vampire-like creatures, you need to check it out, but definitely not during dinner.  This new take on an old theme is surprisingly fresh and the action is swift and unlike The Leftovers, you get answers!!  Starring Corey Stoll (the dude from Liam Neeson’s Non-Stop but with hair) as the guy from Disease Control who knows what’s going on but no one listens to, and David Bradley (fucking Filch from Potter and Walter Frey from GoT!) as an old man who has seen it all before and carries around a cane/sword used for lopping off the heads of the walking dead/vampire/anaconda tongue slinging blood suckers.  Samwise Gamgee (Sean Astin) and Kevin Durand (that big bastard from Russel Crowe’s Robin Hood and oh by the way, Lost too) provide some great support to this Guillermo del Toro vehicle.  I read it’s already been picked up for a second season, so get on board now.  Manhattan has never been more interesting!

Definitely do not eat whilst watching The Strain.  We’ve made this mistake a couple of times and it’s not a good move.  I enjoy watching this show.  I thought I had seen vampires done every possible way.  But they reinvent them here and it’s quite interesting.  They had me hooked with the pilot: a jetliner lands on the tarmac and completely shuts down.  All passengers are assumed dead and then, suddenly, 4 survivors abruptly awake.  Spooky shit.  What I’m hoping for now is a nice steady building of a diesel army to fight these disgusting bastards.  That would be ideal.

Lastly, The Bridge.  This gritty peek into life in Juarez, Mexico centers on the dynamics between the drug cartel and law enforcement.  If you saw the first season of this cable gem, good for you.  It was spellbinding.  And it hasn’t lost too much speed as it coasts through season 2.  Some interesting new characters are introduced including one crazy, murderous bitch.  The very cute Marie from the first couple Bourne movies.  I’ll let Ross expound upon that tidbit.  Diane Kruger and Demian Bichir, the two leads, have an unusual and unique chemistry that fuels the show.  I think what I like most about their chemistry is that it’s unconventional.  They are very different people, they have no sexual chemistry and they don’t much like each other a majority of the time.  At its core, The Bridge is pure drama.  But occasionally they sneak in a good chuckle.

Border town mayhem.  Juarez and El Paso.  Honestly, I’ve never been there, but if Mexico is the corrupt, shithole portrayed here, no wonder the residents are streaming over the border.  Like many of the great shows, there are many moving parts here and plot lines.  Bichir’s son was murdered in season one and Kruger’s sister was murdered in the time period before the show begins.  She is borderline autistic, but a great cop, who was raised by her boss, played by Ted Levine of Monk fame but best known as the creepy Buffalo Bill in Silence of the Lambs.  Bichir is a good cop in a sea of bad ones, and they’re both always on the verge of getting whacked.  The supporting cast also includes Matthew Lillard, old Shaggy himself.  Annabeth Gish, Kat from Mystic Pizza.  And new this season, as Maria mentioned, Franka Potente, sweet innocent Marie from The Bourne Identity is anything but here as Eleanor Nacht the drug cartel’s money lady/psychopathic serial killer.  She’s awesome in the part, dressed like a church lady, she killed a teenager among others, and walks around with one of those icy stares that tells you not to turn your back on her.  The Bridge connects the two towns and countries, and there is bad stuff coming and going: drugs, money, illegals, murderers.  The grit comes right through your TV screen, you almost have to take a shower after every episode, but it’s some of the best, most compelling TV on currently.

We watch quite a bit of TV; we love it.  We will be recapping some others very soon, so keep an eye out.  And we can’t wait for our personal favorite, and frankly everyone else’s: GAME OF THRONES.  It’s the best of the best.  Bottom line.  Happy watching.