Maria and I came upon this photo under mysterious circumstances.  It came in an unmarked envelope, an envelope that was too physically cold for having spent time in our Florida sun.  Inside a note: “We’ve decided to use this photo on the posters for the 2044 release of the age old classic, Gunga Din.  Daniel looks pretty good for 76 doesn’t he?!”  The Daniel in question is none other than James Bond himself, Daniel Craig as you can plainly see.  How is it that we received this strange letter?  Is it actually a message from the future??  Or could someone simply have seen the picture on the wall at a wedding they recently attended, and sent it to us as a prank.  And even if the latter is the case, couldn’t that still be future Daniel Craig in the aforementioned movie?  Like Jack Nicholson’s pictures on the wall, decades before he arrived at the Overlook Hotel, in Stephen King’s masterpiece The Shining.  These questions may remain mysteries, but you can look at the picture and judge for yourself, come to your own conclusions.  We may all just have to make it to 2044 to find out. 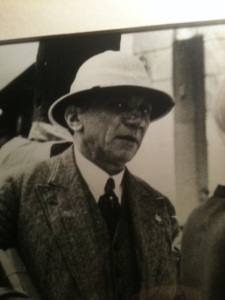 We hope he’s still getting hand jobs from Rachel Weisz,  (See the Golden Globes a couple of years ago.  She had a handful under the table!  You go Rachel!)