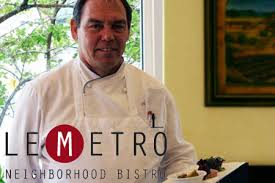 It’s hard to imagine that the Abacoa Town Center is providing a worthy locale for the level of French cuisine that is being offered in this hidden Jupiter gem.  Ross and I rarely venture off the culinary beaten path, as we have our “tried and trusted” favorite spots.  But Le Metro is a date night must!  The menu caught my eye as I thumbed through one of those giant coupon books and we decided to give it a shot.  The results were, as my date stated, “eye rolling good”.  My only regret was my last minute entrée change; switching from the Dover Sole to the bouillabaisse.  Which, believe me – was magnificent, but I had been eyeing the Sole since I had spotted the menu.  And during our visit to the restaurant I overheard a gentleman, who seemed like a regular of Le Metro, ask if the chef was in.  Once this was confirmed he proceeded to order the Sole.  A sure sign that my last minute change was destined to end in food envy.  For a Saturday it seemed relatively slow, but as the night filled out, so did the seats. We grabbed a beautiful spot on the outdoor patio.  And as we warmed up with the Escargot & Mussels, my taste buds transported me to the French Riviera.  And I wasn’t surprised to read that the Chef de Cuisine, Christian Alunno, hails from Nice.  Only a native could be responsible for this flavorful tour of the Mediterranean coastline.  His resume is impressive.  But the food does more than prove his talent, it embodies his passion for the craft. 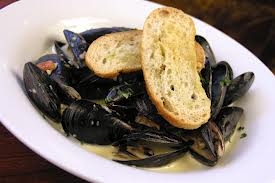 As Maria mentioned, we have our regular spots and favorite dishes all over the area.  Beef Carpaccio at Brio, flat breads at Season’s 52, white chicken chili at Cheesecake Factory, oyster shooters at Spoto’s, sushi at Too Bizaare, guacamole and queso dip at Rancho Chico, buffalo wings at Bru’s Room and of course the incomparable Chilean Sea Bass at The River House, blackened, thank you very much.  Well, we have a newcomer to the line-up, and my goodness, what an addition Le Metro is!!  We stumbled upon this jewel by pure random chance, as we had no clue what or where we wanted to go, just that it be someplace different.  The first place we called, the number was disconnected.  Little did we know at the time, fate was working the room.  I was more than skeptical of our final choice to be honest.  Maria liked the menu, but I had never heard of the place and Abacoa has not been a destination of ours in recent years.  Our error to be sure because this food experience was certainly among my top 5 of all time.  To our list we can add: escargot and the mussels at Le Metro.  The escargot is served in the usual dish with the six little holes for the snails to occupy, but there is nothing else “usual” about these melt in your mouth mollusks.  Sautéed in Pernod and garlic butter and served with the lightest toast points, one bite sends you to an Earth shaking food orgasm.  The Prince Edward Island mussels are served in a light broth of shallots, garlic, parsley, diced tomatoes, white wine and cream that is so good they should offer it as a soup on it’s own.  Dipping the fresh made house bread in there will make your taste buds feel like they died and went to Heaven, and you will most certainly need a re-up on the bread.  For my meal I had the Braised Short Ribs which were tender and delicious, but the appetizers totally stole the show.  We will be going back to Le Metro soon, Maria has to try that sole, but not until we’ve earned it.  We’ve been dieting since that night.

Le Metro proved to be the most surprising restaurant outing we’ve had in years.  Its location is quite understated and although we hope to bring it some business, it was rather nice being able to enjoy a Saturday evening without the usual hustle & bustle of crowds.  The ambience was elegant, yet casual, and the staff seemed quite down to Earth.  I will mention the only disconcerting moment of our evening was when the bartender came to ask if we had paid our bar tab.  And then the waitress double checked with us.  We had grabbed a quick cocktail at the bar and decided to stay for just one more, as we were informed that it was still happy hour and we could grab a 2 for 1.  We 100% knew we had paid with cash before camping out at our dining spot, but this confusion left us feeling a bit awkward and uneasy.  Especially because we didn’t want our server to feel stiffed.  Perhaps it has something to do with my extensive experience in the restaurant industry as a server, bartender and a manager.  And Ross’ empathy with servers stems from his daughters’ vast experiences in the field.  But we always try to be great customers and just decent human beings in general.  We try to leave well deserved tips, help bus our table a bit and speak to servers with a certain level of mutual respect.  This was a small blip in an otherwise flawless experience.  We will most definitely be heading back to Le Metro for a romantic dinner or just an evening of delectable apps and cocktails.

The bar tab incident was a bit aggravating but certainly not a night wrecker.  The family of eight that dined next to us were obviously regulars, complete with spoiled children and an air of entitlement about them that provided us with some pleasant “people watching” and listening moments.  A personal favorite was the seemingly endless “water spilling incident” drama.  The waitress was a good sport and she handled that group better than I ever could.  Really the only true negative of the night was that I had promised Maria I’d take her dancing after dinner, but the crème brulee (also exquisite) we finished the night off with, finished us off.  We went for a walk, then took our overindulgent asses home.  Next time honey, promise.  Le Metro is amazing, surprising and wonderful all at the same time, and you should experience it ASAP.  The food is beyond compare and the prices are surprisingly reasonable, the end result is nothing short of euphoric!