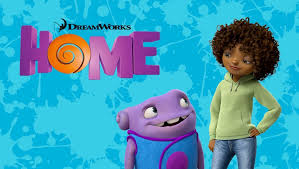 Home is the story of The Boov, these ghosts from Pac-Man looking creatures, that are inexplicably and constantly running away from their mortal enemy, the Gorg.  Their travels take them to Earth, where they imprison the whole planet, all the while acting like they’re doing us a favor.  The Boov are delusional, and they’re led by Captain Smek (Martin) a particularly self serving megalomaniac.  Oh (Parsons) is that most annoying Boov, you know the type, that guy/girl you run away from before they spot you and you’re trapped by inane conversation until you want to blow your brains out.  Oh quickly runs into Tip Tucci (Rihanna), a little girl who’s been separated from her mother Lucy (Lopez), and for all intents and purposes, the interaction between those two is the whole movie.  Their quest to find Tip’s mom and Oh’s growth into self awareness give the movie a sweet heart while projecting important life lessons.  We had our own Oh right behind us in the theater.  After returning from refilling our popcorn, Maria informed me, “the people behind us are horrible.”  More specifically, this one kid, maybe 11, was screaming a constant commentary of every action on the screen.  “Hahaha, the Boov need to run away!!!”  “Look Oh made the car fly.”  Then, something happens that doesn’t bring a chuckle from anyone else:  horrible, annoying, screaming, horse laughter.  After a firm shooshing from Maria, and another from the people behind him, he got a little better, but talk about brutal!  All I could think of was, imagine living with that kid everyday??  Talk about blowing your fucking brains out!!

It was bad.  Honestly, I would have made a much bigger deal about it, but then I thought that the kid may have an actual disorder.  Whomever was accompanying him to the film was more at fault for this behavior anyhow.  All of the previous loud commentary and excessive laughter was followed by the kicking of my seat.  For the first twenty minutes of the movie I thought I may need to leave or strangle myself with the handle of my purse.  Nevertheless, this made it difficult to enjoy the entire movie.  But about half way through, the behavior settled to a tolerable lull.  It’s difficult to make a kids movie that impresses me.  I mean, everything has been done and over done.  It’s quite something when you get a Lego Movie or a Frozen experience.  Especially when you’re expectations are so low.  I wouldn’t quite say that Home deserves to be on the same shelf as those new classics, but there was something very likable about this story.  It had some very important underlying lessons and the dynamic between our alien and human are sweet.  Oh learns how to stop running from his problems and start solving them instead.  Something that eventually benefits the Boov and the humans.

I agree completely, Home is a cut below the Wreck-it Ralph’s, Up’s and Finding Nemo’s of the past, but after a slow start, it won me over.  Even Parson’s Yoda/Jar Jar Binks-like speech patterns for Oh, I found endearing after a while.  DreamWorks pulled in 54 million the first weekend with this effort, and our theater was packed on the following Friday, so word of mouth has been decent.  I would recommend it for sure, especially if you’re on the fence.  The good news for you if you go: the crowds should be dwindling, so if you draw your own Oh in your area, you can always move.  I’m jealous!

This is definitely worth the trip, especially with the kids.  I think it says something that I still found this movie fairly decent even with all of the disturbances surrounding me.  And one last note about that; we were accompanied by a similar age child, Ethan, who was quiet and respectful of those around him.  That’s because it has been explained to him at length over the years that anything other is unacceptable.  So, if you’re a frequent movie going family, it’s probably best to have a nice outline of rules before venturing into the theatre.  And guess what, if you get in there and your kid isn’t acting right, you should pull a Boov move and skedaddle.