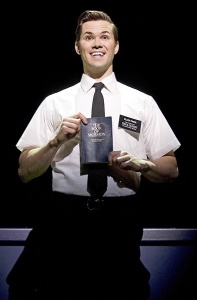 Sold out 1543 shows in a row on Broadway and counting.  We saw it at the The Kravis Center in West Palm Beach, FL; but possibly coming to a town near you soon.

I have to begin with the background story of how Maria and I were able to attend The Book of Mormon.  I didn’t even know it was coming to town until the day before it opened at the Kravis, as I read about it in the paper.  Also, I had no clue how popular this show was, but I soon discovered in my attempt to get tickets.  I called my brother Randy, because I know he donates to TKC every year, and I thought he might have an “in” for getting tickets.  He did, but there were simply no tickets to be had anywhere, for any price.  My brother, however, is not used to taking “no” for an answer.  I had called him on Monday, he proceeded to embark on a five day crusade to find tickets.  At the eleventh hour, he found a pair, in Las Vegas (yes Vegas!) and had them FedEx’d on Saturday morning.  He showed up at our door at 10 AM: “Merry Christmas!  You have no idea what I went through to find those.  Have fun.”  I also shudder to think what he paid for them, but oh my goodness, did we ever “have fun”!!

We just felt so lucky to even have the opportunity to go and see this play, especially under the circumstances.  But we had a wonderful night out on the town thanks to Randy.  And we had a ball getting decked out and doing something a little different.  This show is pure, unadulterated fun.  What I love about Trey Parker and Matt Stone, the creators of a little t.v. show called South Park, is that they aren’t simply filthy or just silly, they’re fucking brilliantly smart.  And their writing beautifully displays their knack for raunch, storytelling and an admirable fearlessness.  The Book of Mormon was right up our alley of humor with innuendos, puns and a supreme selection of musical parodies.  One of our most favorite things.  The most unbelievable aspect of this rendition is that most of this cast was comprised of second string actors and the performance was still absolutely flawless.  I can’t imagine it could be any better on Broadway.

It would be fun someday to get to the Broadway version to compare the performances, but I’m with Maria, hard to imagine anyone doing it better than this cast.  The humor here is definitely not for everyone, but absolutely in MRSRAG’s wheelhouse.  Let’s face it, Mormons have some crazy ideas: magical underwear, your own planet when you die, white people were here in the U.S. before Native Americans etc., so making fun of them is easy.  Matt and Trey rarely disappoint when it comes to laughs and the songs are fantastic, only equaled by the people singing them.  The play kicks into high gear when Elder Price (Egan) and Elder Cunningham (Colletti) get to Uganda to do their two years as missionaries and bring as many of the locals into the fold as possible.  As you may guess, the Ugandans are less than receptive as they have many horrific problems to deal with, and one of the first numbers; reminiscent of the hakuna matata song from The Lion King, is hilarious.  Faith, persistence, despair, loss of faith, innovation, hope; all examined here in song, performed brilliantly with tongue firmly planted in cheek.  If you’re not easily offended, do yourself a favor and try to find The Book of Mormon if you get a chance, you’ll be happy you did and you won’t even end up with “maggots in your scrotum”.  Just believe, because I say so, it’s the Mormon way!

This isn’t the first time Matt & Trey have poked fun at the Mormons.  Some of you may be familiar with the South Park episode where a constant stream of, “dum, dum, dum…” plays in the background during an explanation of how Joseph Smith developed the faith.  I imagine growing up geographically close to Mormon country has had some hand in influencing this pair’s affinity for the religion.  They originate from Colorado and Mormon land is only a hop or skip away in Utah.  I don’t want to give anything away, but I have found myself singing their Hakuna Matata-esque mantra, ‘Hasa Diga Eebowai’.  If you don’t find yourself as lucky as us with the ticket situation, you can always check this one out on YouTube.  It’s well worth stealing five minutes away from cat videos.  And one final note, did we mention that our seats were two rows from the stage?!  Now THAT is some Christmas present.  Thanks again Randy!!